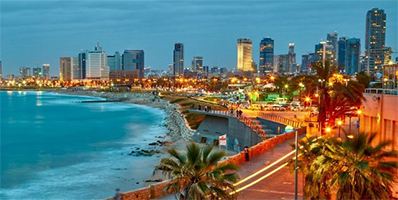 Arrive Tel Aviv. Transfer to your hotel in Tel Aviv 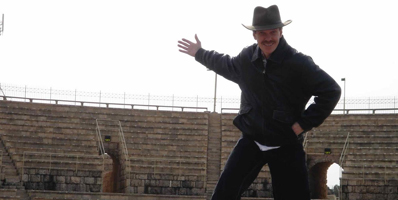 After breakfast we begin our journey north to ancient Caesarea, where 64 coastal water wells have been examined, dating from the early Roman period (with the oldest occurring in the 1st century AD), up to the end of the Crusader period (mid-13th century AD). On the site we find a breathtaking archaeological park with pillars and sculptures, and the remains of a hippodrome, with frescoes and stone seating.

The ruins of the seafront Promontory Palace include the remains of a mosaic floor. Caesarea was the regional capital of the Romans, and from here Peter was sent to Rome. Driving further north we arrive at Mt. Carmel (Mukraka),where Elijah slew the prophets of Baal.

Then we travel to Tel Megiddo, 30 civilizations deep, where we see a Canaanite altar, Ahab’s water tunnel, Solomon’s stables and a panoramic view of the Valley of Armageddon.

Driving past Haifa with its panoramic view of the Mediterranean port and Kishon inlet, we arrive at our hotel for dinner and overnight. 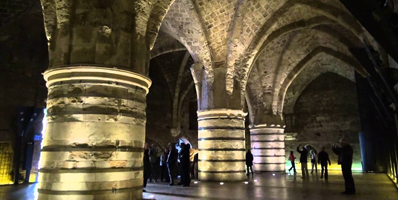 After breakfast we will make our way to the city of Acre, mostly associated with the Crusaders. Their rule extended from 1104-1187, from the city's first capture to its loss to Saladin after the Battle of Hattin.

They ruled again from 1191 to 1291, between Acre's recapture during the Third Crusade and its final loss to Mamluks, which effectively ended the period of Latin rule in the Levant. 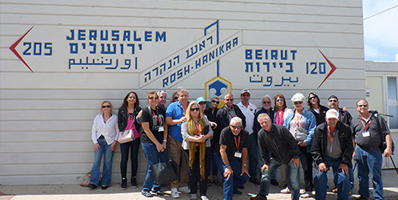 The Crusader structures called the Knights’ Hall or the Citadel of Acre originally served as the Knights Hospitaller Compound. The buildings extend over an area of c. 8,300 sq.meters. Engineering measures have been adopted to save the hall and develop the underground complex. 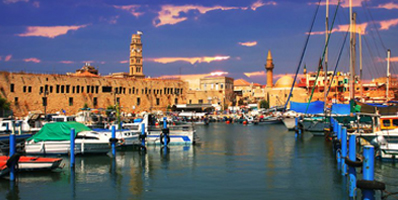 After our visit we will spend time walking along the walls of the city before heading to the Yehi’am Fortress Park, where we again travel back in time to the Ottoman era and Crusaders. The fortress was built on the ruins of Roman and Byzantine structures and significantly strengthened in 1208, when the Crusader king allotted the farms to members of the German Order of Teutonic Knights. In 1265, the Mamluk Sultan Baybars conquered the fortress and destroyed it. Our journey now takes us up to the Golan Heights and the Banias, including Caesarea Philippi, which the Crusaders heavily fortified since this frontier city was regarded as a strategic asset. Sections of its gate, wall and towers are still visible in the ruins. 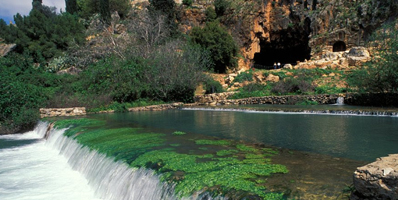 Our last stop today will be Nimrod’s Castle, overlooking the entire region. The castle was built by the Ayyubids and hugely enlarged by the Mamluks. Next, we make our way to the Sea of Galilee and check into our hotel. Dinner and overnight. 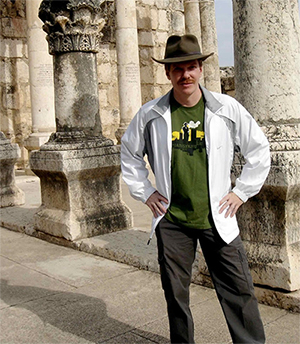 Breakfast at our hotel. This morning we will begin our day with a walkthrough of the Battle on the Hill – the Horns of Hattin. As a direct result of the battle, the Muslims once again became the eminent military power in the Holy Land, reconquering Jerusalem and many of the other Crusader-held cities. These Christian defeats prompted the Third Crusade, which began two years after the Battle of Hattin.

Making our way back to the Sea of Galilee we will arrive at Capernaum, where one of the few remaining Crusader buildings is the Church of St. Peter. Hidden down an alley from the lakeside promenade, it was erected in 1100. Jesus had made Capernaum his home town. We will next make our way to Ginosar to see the ancient boat discovered in 1986 on the northwest shore of the Sea of Galilee. 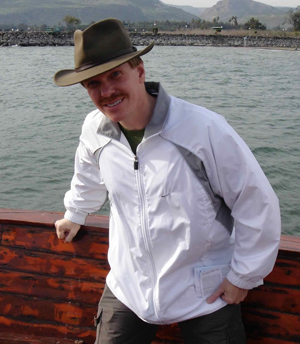 The ancient Galilee Boat, also known as the "Jesus Boat," is an ancient fishing boat from the 1st century AD. We now will board our own wooden boat, like the one discovered, and make our way across the Sea of Galilee to Ein Gev. Return to our hotel for dinner and overnight. 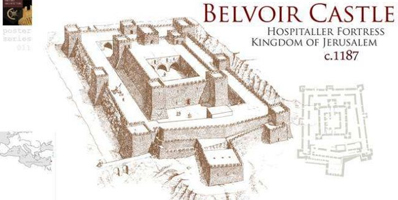 After breakfast we will make our way to Nazareth, the boyhood home of Jesus, where in 1099 the Crusader Tancred captured Galilee and established Nazareth as his capital. He was the ruler of the principality of Galilee, which was established, at least in name, in 1099, as a vassal of the Kingdom of Jerusalem. Later 1115, Nazareth was created as a seigneury within the principality. When the town returned to Muslim control in 1187, following the victory of Saladin in the Battle of Hattin, the remaining Crusaders and European clergy were forced to leave. 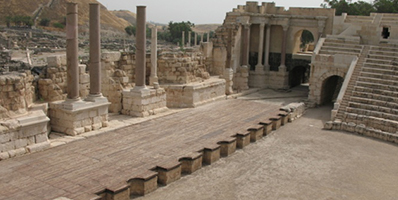 We next take our leave of Nazareth and make our way to Mount Tabor - the Basilica of Transfiguration. During the period of the Crusaders, the mountain changed hands many times between Muslins and Christians. In 1099 the Crusaders fortified the area of the monastery which was on the peak of the mountain, in order to protect the pilgrims from Muslim attacks. In 1101, when Crusaders controlled the area, the Benedictine monks rebuilt a ruined basilica and erected a fortified abbey. In 1212 the mountain was occupied and unsuccessfully besieged by the armies of the Fifth Crusade in 1217. But in 1229 it was again occupied by the Christians. Moving on to the Jordan Valley as we make our way up to Jerusalem, we will stop first at Belvoir Castle, a Crusader castle set on a ridge right above a significant bridge over the Jordan River. From Belvoir the Crusaders could raid convoys of Muslim merchants crossing the river, and could also alert others on Muslim attacks from the east. 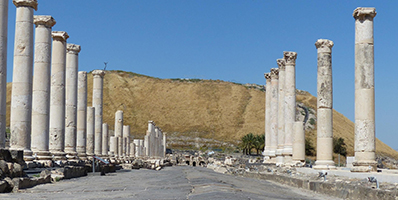 The Hospitallers turned Belvoir into a huge fortress with massive defenses. Our last visit before heading to Jerusalem is Bet Shean.

Inhabited since Neolithic times, it is one of the oldest cities in the world. In the Roman and Byzantine era it became a regional capital, and it continued to thrive in the Early Muslim Periods. But in 749 CE Beit-Shean was destroyed by a devastating earthquake, and later abandoned for centuries.

A small Crusader fortress surrounded by a moat was built in the area southeast of the Roman theatre, where the diminished town had relocated after the earthquake of 749. The fortress was destroyed by Saladin in 1183. We now continue our journey up to Jerusalem and check into our hotel. 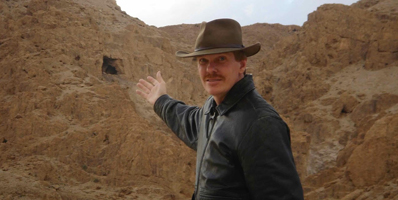 After breakfast we will make our way to the lowest point on earth, the Dead Sea. Our first stop will be Qumran, best known for the discovery of the Dead Sea Scrolls. We begin with a short film about the unique monastery-like community that was once located here. A claim is also made that John the Baptist may have joined the community at some point. 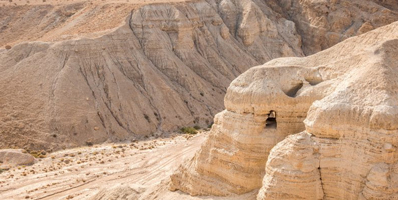 Walk through various rooms that highlight daily life at Qumran, and see a copy of the Dead Sea scrolls. We now continue along the Dead Sea to Masada, which was King Herod's fortified desert palace. Masada’s famous and tragic chapter would take place years later when the Jewish rebellion failed and some fled to the rocky plateau.

After the Roman soldiers finally captured Masada they found only two women and five children, who told a story of how the defenders preferred suicide over slavery. In later centuries Christian Monks settled and lived among the ruins and added only one structure, a church next to the western entrance. After departing via cable car, we will drive to the ancient synagogue of Ein Gedi, which served worshippers from the third to sixth centuries AD. A little further north we will come to the Ein Gedi Reserve. Here King Saul was hunting David, and while “relieving himself,” David snuck up and cut off a corner of his royal robe. Afterward, when David confronted the king and proclaimed his innocence, Saul lamented his own sin and departed. As we now make our way back to Jerusalem, we have one more important stop - Wadi Qelt, to see St. George’s Monastery, which was built in the late fifth century. 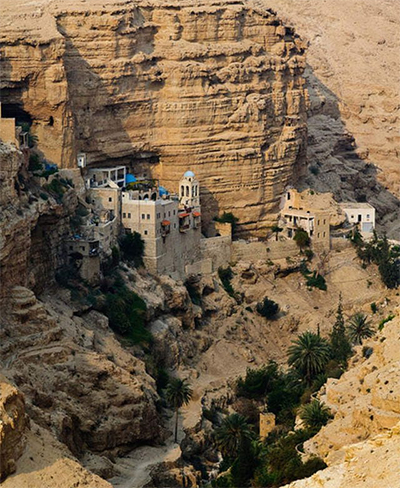 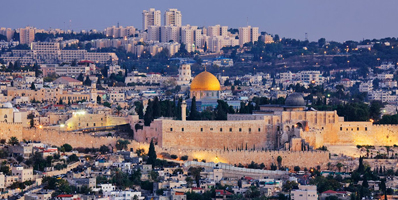 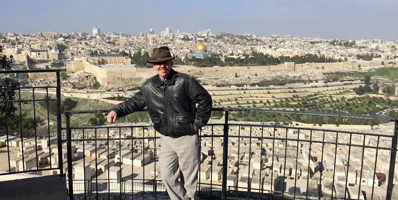 Today we begin with a panoramic view of the city, Mount Moriah and the Dome of the Rock from atop the Mount of Olives, followed by the Garden of Gethsemane. We continue to the Church of the Assumption to see the large crypt containing the empty Tomb of Mary. 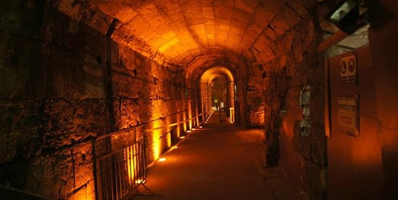 We next make our way to the City of David and review the main archaeological discoveries at the site, including the possible remains of King David’s Palace and “Warren’s” shaft, leading to the Gihon Spring, where King Solomon was anointed. We then a walk through Hezekiah’s Tunnel to the Pool of Siloam.

Taking in the latest excavations in the Central (Tyropoeon) Valley, we will walk through a section of the Second Temple drainage channel to the monumental foundation stones of the Western Wall at the foot of the Temple Mount. From there we will climb and exit onto the magnificent road where the Jewish pilgrims walked, two thousand years ago. Next we will visit the Wailing Wall and then the fascinating Rabbinical Tunnels leading us through the Second Temple era. Return to your hotel for dinner and overnight. 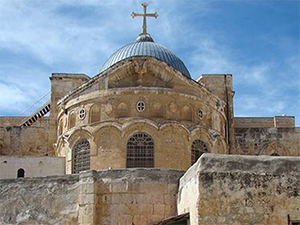 This morning we begin our tour with a visit to the Tomb of King David, and above it the Room of the Last Supper.

The emphasis here is the impact Crusader Architecture has on this site. From here we will head to Lion’s Gate and begin with a visit to St. Anne’s Church and the Pool of Bethesda, where Jesus performed the famous miracle of healing of the paralytic. Walk the Stations of the Cross – the Via Dolorosa, including Station 2, the Judgement Hall of Pilate, located at the Church of the Flagellation, and the Church of the Condemnation and Imposition of the Cross, all the way to the final Station 14 inside Church of the Holy Sepulcher. 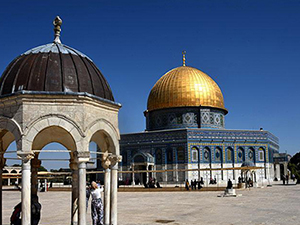 We continue along the city walls and down to some excavations on the edge of the Old City, proceeding to the ruins of the Crusader Nea Church, built very close to the site of the original Byzantine version. Stop at St. Mary’s Hospice of the German Knights, which used to be the base of the Order of Teutonic Knights in Jerusalem. We see the remains of their chapel, hostel and living quarters. Stopping for a rooftop viewpoint over the Temple Mount on the way, we continue through the narrow streets which used to form the city market in the Crusader period.

Time to browse in the Jewish Quarter before returning to our hotel. Dinner and overnight.

After breakfast we make our way to the Israel Museum. Walk through collections of centuries-old. Israeli artifacts including the Dead Sea Scrolls, and then a guided walk through an accurately detailed model of Biblical Jerusalem. This model will help put into perspective all that you have seen over the previous days touring. We conclude the day with a visit to Yad Vashem, the Holocaust Museum, for a needed reminder of what the Jews have suffered as a people. This afternoon you are on your own to do shopping, or revisit places we have seen in the past couple of days. We will gather together for our farewell dinner this evening.